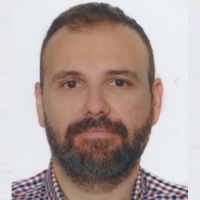 George Xilouris received the B.Sc. in Physics from University of Ioannina in 1999 and his M.Sc. in Automation Systems from National Technical University of Athens (NTUA) in 2001. Since 2000 he is working as Fellow Researcher at the Institute of Informatics and Telecommunications in NCSR Demokritos. He has strong technical and research expertise in the fields of Network Management and Virtualisation, Programmable Networks, Cloud Networking, Satellite Networks, Media delivery technologies and Performance Evaluation of IT services. He is the author of more than 60 publications in journals and conferences and editor and author of numerous project deliverables and technical reports.

Currently he is a member of the Organising Committee of IEEE NFV-SDN and IEEE Network Softwarisation conferences. He has participated in numerous EU-funded projects. In the past he has been technical manager of the project T-NOVA one of the first funded projects on Network Function Virtualisation. Currently Mr. Xilouris is involved in the projects 5GTANGO, MATILDA, on DevOps and 5G, SHIELD on security and 5GENESIS on 5G trials.

Recently, his activities have expanded towards the commercial exploitation of research acquired expertise being the co-founder and CIO of a start-up company.